I don’t know about you, but I don’t remember having a car with electric windows until the late 1970s. Within a few short years, I quickly discovered that the glass could stick to the rubber frame or track that it runs on.

Imagine my surprise when I learned that window tracks needed to be lubricated regularly. At first, I thought, what the?? Isn’t that like muffler bearings? LOL. I was young, what can I say?

Yes, if you haven’t discovered this little truth yet, now you know.

The tracks that your power window rides on need to be lubricated. And no, WD-40 won’t do the trick.

I’ve found the best lubricant for window tracks and I will tell you all about it below. 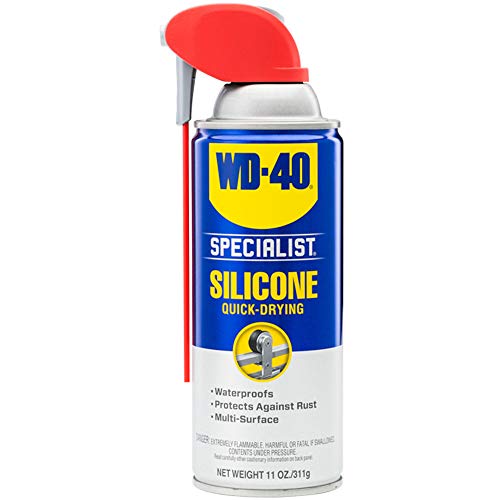 After just telling you how WD-40 wasn’t a lube, you might be wondering if I’ve lost it suggesting this product. But read carefully: This is NOT the usual WD-40.

This is a silicone-based lubricant. It will not only let the window slide smoothly, but it’s also waterproof so it won’t wash away with water.

Unlike many of the silicone sprays, this one comes with a moveable straw. It allows you to direct the spray right into the tracks and not all over the glass.

WD-40 is a well-known brand name that is used in various industries. You know that it will be reliable. One of the best things about silicone is that it doesn’t attract dust or dirt.

It dries very quickly and leaves a clear film behind. In addition to window tracks, you can use this on door hinges, locks, and cables.

One side note: this works wonders on the vinyl windows in your house. Trust me on this one. I gave my vinyl windows a little squirt and now they glide open as if they are on wheels.

Chances are you are using white lithium grease and that works just fine. But silicone is waterproof, dustproof, bug-proof (seriously, have you ever seen how many bugs get stuck in that white grease?) and this product works in dozens of applications.

One of the only drawbacks to silicone sprays is that they don’t last as long as lithium grease. Of course, lithium grease also eats up rubber parts, so there is a give and take here.

If you are new to car maintenance or have never considered adding a lubricant to the window tracks, I highly recommend buying WD-40 silicone spray.

Look at all the items on your owner’s manual that are supposed to be lubed regularly. For example, locks and hinges. You can use this product on every single one of those items.

Nearly all users love this product. The only complaints I can find are from those who say that it sprays too hard and they feel they are wasting a lot of the product.

As far as how well the product works, no one has a complaint. Now that’s saying something!

Try this on your window tracks and see if you don’t notice an immediate difference.

Buy on Amazon
Runner Up

When I think of DuPont, I think of paint. But this company makes hundreds of products including a dry Teflon spray. It works nicely for your car’s window tracks.

To be honest I’ve never thought of using a Teflon spray. One of the big plusses for Teflon is that it is still effective at temperatures of -100 to 500 Fahrenheit. That’s something you don’t see very often.

For those of you who live in extremely cold or extremely warm climates, this might be something for you to consider.

While silicone does not attract dirt, Teflon is known to repel dirt. If you drive on dusty roads or live in a dry place with lots of dust and dirt in the air, this is the lubricant for your car windows!

While the spray does go on wet, it dries quickly and leaves a micro-thin coating to reduce friction. Less friction equals fewer squeaks and other noises.

This is also excellent for other uses besides the window tracks on your car. It works well for sliding glass doors, vinyl windows, hinges, and more.

I must mention this because the manufacturer did as well: Do NOT use this to coat a damaged Teflon (non-stick) cooking pan. This is NOT that type of product.

This comes in a clear bottle so you can see when the Teflon has settled in the fluid suspension. If you see this, shake well and you are good to go.

Most users love this product. A few have mentioned that metal items they have sprayed with this do not rust.

Users who had negative things to say generally involve the misuse of the product.

Do NOT spray this on painted surfaces. It might remove the paint.

If you use this for the window tracks in your car, cover the door with a plastic bag. Others have said that the straw for spraying didn’t fit the nozzle and a few complained that their bottle came with no nozzle.

As far as the use of the product goes, no one had any complaints. One spray and everything glided as smooth as silk.

Buy on Amazon
Out of the Box Option

I want to mention this option because it piqued my curiosity when I read about it.

If you are a confident or brave soul and are planning to open up your car door, using a plain white lithium grease is fine for metal parts.

You’ll pull off the inner door panel so you can lube the regulator, the metal window channels, and then the window track (the rubber portion).

I read in one automotive forum that some people use a soap-based brake caliper grease, which is something I hadn’t considered.

I’ve used plain old wheel bearing grease on any brake parts that needed it. Even though it does eat up rubber parts, I always thought that the brakes would be changed in a year or three, so it didn’t really matter.

The CRC Brake System Grease not only contains all the oxidation, anti-wear, and anti-rust additives you would want, but it also works in extreme temps of -50 to 3000-degree Fahrenheit.

This is a synthetic, ceramic, dry-film lubricant that was made for brake parts. But it would also work for all of the window channels, including the track, without having to change products.

The only real problem I see with using this grease is that it is very fluid and messy. You should take care to not get it on the paint, the door panel, or the seats of your car.

If you want to get the best of both worlds, and by that I mean a lubricant that won’t eat rubber but is also longer lasting than a silicone spray, the CRC Silaramic Brake System grease is a great option.

Nearly everyone who has used this product loved it. But I’m sure these users were talking about brake performance and not on their window tracks.

A few users complained about the price, but I personally don’t find it to be overly expensive.

This is just an out of the ordinary product that I thought deserved a special mention.

Is WD-40 a silicone lubricant?

The original WD-40 is NOT a lubricant and it does NOT contain silicone.

The name itself, WD, stands for Water Displacing. This means that WD-40 (which the inventor claims came from the fact that he tried 40 different formulas before he found one that performed the way he wanted) removes water, dissolves rust, and is more of a solvent than a lubricant.

Believe me, I’ve used WD-40 as a lubricant when I’m in a hurry and that blue and yellow can is the first thing I see. It will work for a short while (a few weeks, perhaps) but WD-40 will destroy your rubber window channels.

It is NOT made for rubber.

There is no silicone in the original WD-40 product. But they do make a silicone-based lubricant. I think they should have given it a different name but heck, who doesn’t know the WD-40 name?

Don’t use WD-40 on your window channels! You will regret that decision rather quickly.

How do I stop my car windows from sticking?

Look at your car window carefully when it is going up and down. Does it stick to the rubber seal or is the window doing a jerking kind of motion?

Hopefully it’s sticking to the rubber seal and not doing a jerking motion. That might mean you need a new regulator.

You probably know that rubber tends to stick to things, especially if it is wet with water. To prevent the glass from sticking to the rubber seal, it needs lubrication.

Apply any of the above window lubricants to the inside of the window track on the door frame to stop this annoying problem.

How do you lubricate car window tracks?

My schedule for lubricating the window tracks in my car is to do so every other year. Usually in the late fall.

You can do this every year or you can wait until the windows sticks. The choice is yours.

You might want to cover the car seat and drape an old towel over the window opening where you would rest your arm when the window is down.

This will prevent the glass itself from being a victim of overspray and protect the seat and paint at the same time.

Roll the window up and down a few times. You should notice a difference especially if you haven’t done this for quite some time or if you’ve never done this.

If this doesn’t work and the window is still “sticky”, you might have a more serious problem.

I suggest that late fall is also a great time to lube other parts of your car as well using the same silicone spray. Think of door hinges, trunk latches, hood latches, etc.

You might also want to spray the door hinges, tailgate latches, and the hood latch. That will prevent these items from becoming sticky or even sticking closed entirely.

Be careful not to get these sprays on the paint or on the upholstery. Spray hinges and latches thoroughly. Open and close the doors, hood, tailgate, or trunk lid a few times and you’re done!

It only takes a few minutes and since you are lubricating the window tracks anyway and you have the can in hand, what do you have to lose?

One of the best things about window lube is finding out that it is really only a few dollars. If you think that your window motor or regulator is broken because the glass sticks, try adding lubricant to the inside of the window tracks. You’ll be amazed at what it can do.

You don’t want to use just any window lubricant. I’ve seen people use Crisco out of the can, a silicone spray (which went everywhere and was tough as the dickens to remove from the glass), and good old WD-40, which is NOT a lubricant.

Keep in mind that most lubricants are oil-based or petroleum-based. That means they eat up rubber parts.

Now if you plan on getting rid of your ride every other year, who cares, right? But for those of us who plan on keeping their car until the wheels fall off, you should consider other options.

Now that you’ve received a quick education on car window track lube, use it to your advantage!