What Is The Best Windshield Sealant?

Is there anything more annoying than a leaking windshield?

That mildew smell. The wet areas on the dash and the carpet. The dripping onto your leg or arm as you drive. Ugh!

Sunroofs are just as bad when it comes to annoying leaks.

Chances are that the leak from your windshield is due to a very tiny gap between the glass and the rubber seal. Over time, rubber seals become hard and brittle due to exposure to the elements.

This can cause a very small piece of the hardened rubber to crumble away. That’s all that water needs to find its way inside.

Most windshield sealants are made from liquid silicone. You apply it to the area and allow it to run down the windshield. That seals all the small cracks or holes.

Whether you want a temporary fix, or you are hoping that a windshield sealant will last for years, you are probably wondering which to choose.

Let’s take a look and see which windshield sealant is the best on the market.

What’s In The Roundup 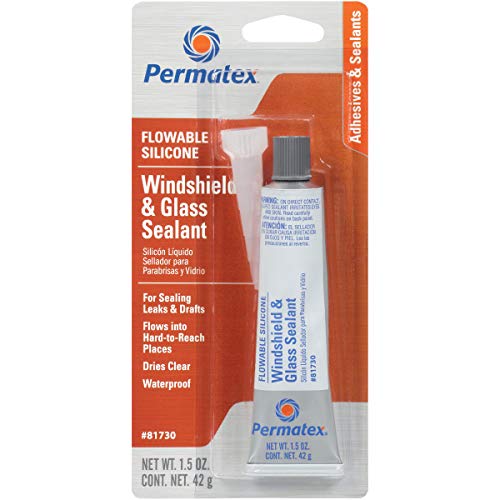 This is the right tool for the job. The silicone flows in to cracks to seal gaps. It resists the heat of the summer and cold of the winter. It's a clear winner in our book.

Permatex products have been around forever. I’ve used plenty of their products over the years, so I always like going with a name I know and trust.

Right off the bat, the label tells you that this silicone “flows.” It should fill in all the cracks and gaps and problem areas with your windshield seal.

Permatex states that their silicone is resistant to temperature changes that plaque most sealers. It’s also resistant to vibration which is a good thing when you are using it on your car. Permatex says this can be used for temps from minus 80 to 450 degrees Fahrenheit! Wow! That’s impressive!

This is a clear silicone. While it won’t show under the glass, you will still want to take care to protect the windshield itself and the paint as it might be difficult to remove.

This sealant is perfect for all types of glass, not only your car’s windshield.

You can use it to seal the sunroof, headlamps, taillights, vinyl windows, aluminum windows, even use it on your boat or RV!

Like many sealants, this will dry in 1 hour. It isn’t considered fully cured for 24 hours. Avoid driving the car or exposing the windshield to rain for 24 hours if possible.

Overall, Permatex Flowable Silicone Windshield Sealer is the best sealant when it comes to your car windshield. At less than $10, how can you not give it a try?

While not made for windshields specifically, it will work in certain auto applications and is useful for other household items.

Loctite is another well-known brand name. It has a long-standing reputation for making quality products.

This silicone isn’t specifically made for windshields. But the good news is that you can use this for other applications. If you don’t need much to seal the windshield, you can use it around the house to seal gaskets, vents, leaks around vinyl windows, and even weatherstripping.

Loctite says that this product will work on just about every surface imaginable..

It works on aluminum, plastic, stainless steel, sealed marble, glass, ceramic, and wood. This only works with some rubber products so you will need to test it first.

Be careful where you place the tube. Several users have reported that the seam appears to be weak and a good squeeze sometimes breaks the seal. That can cause the remaining silicone to burst out and damage other items. Put a rag underneath it in case this happens.

This is a great product if you want to seal aquariums and other items. I’m betting it works well to seal windshields too.

It seeps in to cracks and holes to seal out water and stop leaks. Think of it as waterproof caulking in a can.

OK, so by now everyone on planet Earth has seen those Flex Seal commercials. Well, maybe not everyone, but you get the picture.

This is made by the same company as Flex Seal and is designed to seep into cracks and holes to seal them. This is a liquid rubber product that stays a bit flexible but seals tightly.

I’ve used Flex Seal to stop leaks on a roof and it did a remarkable job. I’ve never used this for the windshield of my car though.

Flex Shot says that this deadens noise, stops vibrations, and will not crack or peel.

I can attest that this is true of the Flex Seal, but I have yet to use this on a car windshield.

Since the sister product Flex Seal works so well, I had to at least mention this to you.

If you decide to give this a try, be sure that you order the clear product since this does come in a few colors. I would also love to hear from you if you used this on your car windshield and how it worked for that purpose.

Can You Put New Sealant Over Old Sealant?

Yes, you could put a new sealant over an old sealant. But you really shouldn’t.

Using a new sealant on top of an old sealant usually results in a sealant that doesn’t stick.

How Do You Apply Windshield Sealant?

What Can I Use to Seal a Windshield Leak?

Many of the products mentioned above can stop leaking windshields with a minimal amount of work. These products were designed to stop leaks on car windshields and other glass windows, such as the ones in your home.

I really want to mention this product. It’s been used by an untold number of people on everything from shoes to wood, plastic to metal, oh yes, and on car windshields.

This is a wonder product that works on everything. It's super strong, versatile, and will last as long as factory applied adhesives.

Shoe Goo was made to hold shoes together. This product was made to work on canvas, vinyl, rubber, leather, and plastic shoes, to seal cracks and to bind broken parts to one another.

It appears that a great many people have also tried this product on purse straps, toys, PVC pipes, and windshields.

One thing users mention is that this can be messy. You probably need less than you would think. Be ready to wipe off any excess immediately! This adhesive sets in about 30 seconds to one-minute max. So you have only a few moments to reposition or remove excess sealant, but that’s it.

Shoe Goo gets high marks from every one. Most complaints being that it is super sticky and nearly impossible to remove once it has hardened.

I am going to give Shoe Goo a try for a few things around my house (and one door seal on my old SUV that just refuses to stay in place). It’s gotten such high ratings and it seems to work far better than super glue or other adhesives.

Can I use Flex Seal on my windshield?

You gotta love those Flex Seal commercials. If they can make a boat out of Flex Seal, why not use it on your car windshield, right?

After reading the label and visiting the website, it doesn’t say anywhere that you couldn’t use it. But take note that the company makes a product designed for windshields called Flex Shot.

One reason many windshields leak on older vehicles is that the rubber seal begins to shrink over time. This allows water to get behind the glass, which will rust the windshield frame. To really stop the leak, the windshield needs to be removed and the rust repaired.

While Flex Seal claims to slow down rust, it doesn’t remove it or stop it completely. As a temporary measure, I would rather use the Flex Shot to seal out the water first, then have a complete repair done later.

If you have a terrible leak and you have a can of Flex Spray (clear would be best, not the grey or white colored ones), you could give it a try. I don’t think it would hurt anything, just be sure to protect the paint in case the aerosol in the can cause damage to the paint surface.

How Much Does it Cost to Replace the Windshield seal?

This will vary depending on the year, make, and model of your vehicle. As you can imagine, a windshield seal for an RV or a BMW SUV will cost far more than a VW Dasher or a Toyota Corolla. Where you live will also determine the price. Many large cities tend to charge more in labor than small towns or rural areas.

Assuming the windshield itself is fine, prices can range from $100 to $500, including labor. This is what makes windshield sealant such as a popular option!

There are a great many windshield sealers on the market. Some products, like Shoe Goo, are not designed for windows. But people have used them anyway.

I’m sure the same is true of many silicones. While not designed for windshields, people tend to try just about anything on hand to stop those annoying leaks.

Not just because of the name, but this product was specifically designed to use on windshields and glass. Other sealers may work too. But that doesn’t mean they are clear, that they won’t damage the rubber windshield seal, or that they will last long.

Permatex went through a lot of testing to ensure that this product could stand up to extreme heat and cold, as well as vibration. That means that this sealant will hold up even under the harshest conditions!

If you want to fix your windshield leak for years (maybe permanently!) I highly recommend using Permatex Flowable Silicone Windshield and Glass Sealer. The way I see it, for just a few bucks, I have nothing to lose. If it works as it should, I have saved hundreds of dollars.