America has been having a love affair with cars ever since Henry Ford rolled out his first Model A. Since then, it has been a continuous job of upgrading and improving not only the motor but accessories as well.

One thing hasn’t changed that much. Motors need oil for lubrication, cooling, and cleaning.

While the need for motor oil hasn’t changed, engine oil itself has gone through tremendous changes.

I remember using a straight 30W oil in my first car. When I went to trade school, I learned about the different weights, what the numbers on the bottles meant, and how to find the best one for your vehicle.

Synthetic oil was unheard of when I attended trade school. The lightest oil produced at that time was the infamous 10W30.

Technology has improved motors and engine clearances become smaller and smaller. Toyota now recommends the use of 0W20 in their new cars and trucks.

Which is the best type of 0W20 oil on the market today? Take a load off and give me just a few minutes. I will tell you what I’ve discovered when it comes to the best 0W20 motor oil. 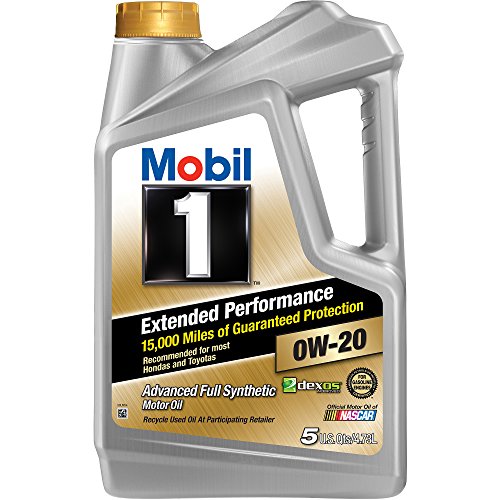 Mobil 1 is probably the first name you think of when you are asked about synthetic motor oil. The Extended Performance 0W20 engine oil is made from a proprietary blend of synthetic base stock enriched with a balanced additive component.

This means that it is Mobil 1’s own unique blend and they aren’t saying exactly what’s in it so it can’t be copied by others.

This oil is designed to last for at least 15,000 miles, which for many people is about one year’s worth of driving. Synthetic oils are known to help clean motors while offering higher levels of protection against wear and friction.

You might hear some people say that if you are currently running conventional oil in a high mileage car that you shouldn’t change to a lighter weight oil to prevent leaks. But this isn’t always true and most users say they’ve had no problem switching.

I can find it just about anywhere, but usually order it online and have it delivered to my house. The oil comes out looking almost the same as when I put it in the car.

This is a terrific quality synthetic oil at a very reasonable price. You can’t find anyone who doesn’t like this oil. You can only find users who complain that the container leaked or that they should have purchased it at another store because it as cheaper.

If you’ve considered trying a synthetic oil, you can pay more.

But you really can’t beat Mobil 1. 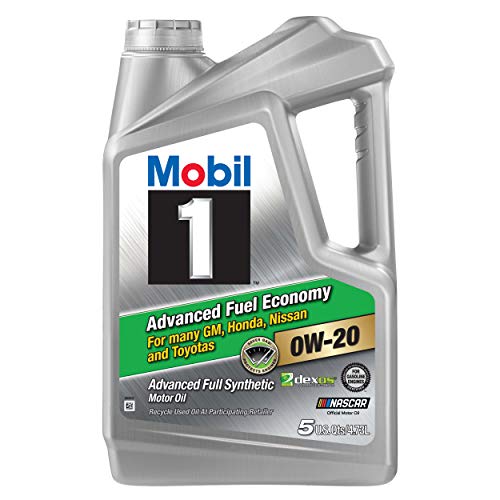 I was confused when I first saw this oil since synthetic oil gives most people a little edge on the gas mileage front.

So what made this oil different?

According to Mobil, this oil has a different set of lubricating additives. It’s supposed to give you a 2% increase in gas mileage.

I’m all for that.

If you are looking to boost your gas mileage, this synthetic oil claims to do that. Most users say that it certainly worked for them. Some say they got an extra 2MPG after switching to this oil.

Like the Mobil 1 Extended Performance, you can’t find users who didn’t like this oil. You find only users who complained that the bottles leaked or the cap on the bottle was cracked in shipping.

That is really saying something when you can’t find any complaints about the product itself!

If you are looking to squeeze out every extra mile from your gas tank, this is the perfect synthetic oil for your ride. 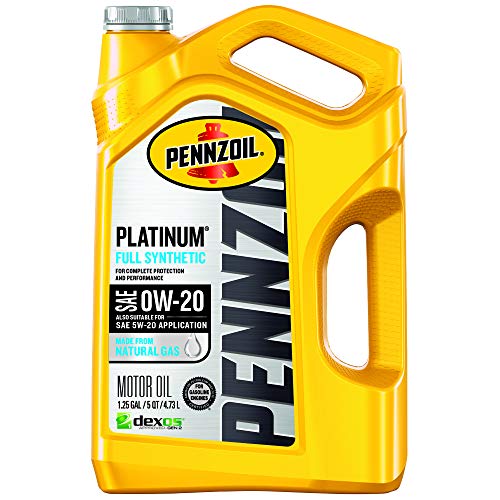 Pennzoil has a long reputation in the automotive world for quality products. This synthetic motor oil is a bit unique.

Most synthetic oils use crude oil as a base, but Pennzoil uses natural gas. Their method changes gas into a liquid form, making this synthetic oil the purest oil possible. The manufacturer claims it is 99.5 percent pure.

Every new Toyota now requires 0W20 full synthetic motor oil. It is no longer an option, but a requirement. If you own a Toyota and you haven’t jumped on the synthetic bandwagon yet, what is holding you back?

Pennzoil states that this oil gives an average of 1.2 percent better gas mileage than using plain old 10W30. That might not sound like much, but imagine getting an extra mile per gallon every single tankful over the next 10 years.

That’s is some real savings, folks.

Of course, Toyota will recommend their own brand of 0W20 synthetic oil. But you will find that if you ask Toyota directly if you can use another brand, Pennzoil is the name that pops up.

Makes you wonder if Pennzoil is making Toyota’s own synthetic oil blend.

Pennzoil says that regular use of their Platinum 0W20 oil will keep the pistons cleaner, allows the oil to flow faster in very cold temperatures, and has a lower evaporation rate than conventional oils.

Users have found this oil to be super long-lasting.

Most people saying they had no problem going 15K and found that the oil still looked decent.

A few users have wondered about dark brown debris found sitting on the bottom of the containers. But no real complaints, even for those who used this in high mileage Toyotas.

I would imagine the brown gunk on the bottom is additives that have settled. Shake the bottles well before using them.

Toyotas, like Hondas, are known for long-lasting engines. Keep your Toyota on the road longer by using Pennzoil Platinum 0W20 synthetic.

You won’t be disappointed. 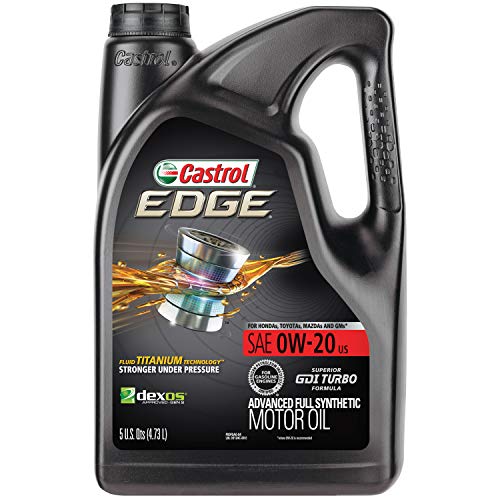 I’ve mentioned before that Honda owners can be quite particular regarding the maintenance of their vehicles. Honda’s themselves can be particular about what parts and oils are used.

Castrol has long been recommended by Honda. Castrol Edge is a fully synthetic motor oil that contains “Fluid Titanium Technology”, which is the proprietary blend Castrol has created.

Castrol Edge is supposed to transform its structure when engines are under more pressure to prevent friction. It is also designed to give you more horsepower due to a lack of friction.

Nearly all users state that they won’t use anything but Castrol Edge in their Hondas.

A few said the same thing about other car models, including plenty of Mercedes owners.

The only complaint I could find about Castrol Edge was that for some people, it was difficult to find any place other than online.

That says a lot about Castrol when there are no complaints!

If you are picky about what goes in your Honda, you will want to use Castrol 0W20 for your ride. 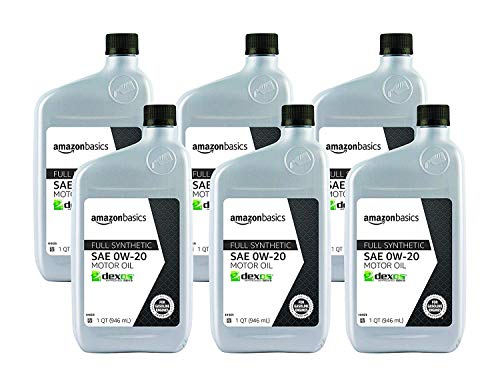 I must mention this oil because…well, it’s AmazonBasics.

While AmazonBasics makes a great many products, no one ever expected them to go full automotive and make synthetic oil.

Nothing is out of Amazon’s reach it appears.

For those who want to use a fully synthetic oil but balk at the price, AmazonBasics has what it takes to become the leading brand in this category.

Technically, Amazon doesn’t manufacture anything. So who is making their oil for them? Warren Distribution, also known as Warren Oil. Warren makes engine oil for many companies, including their own brand name. But they also make Amazon’s oil.

This means that the oil is high quality that you can count on without paying for a big name. Some people don’t trust anything but one brand.

For those of you who, like myself, want good quality but don’t want to pay for big-name advertising costs, AmazonBasics is playing your tune.

If you search you can find YouTube videos where the oil is used in performance tests. AmazonBasics has performed as well as or better than the big brand Mobil 1.

I was unable to find any users who had a problem with the oil. Only those who found the lack of colorful bottles, interesting names, and lack of bang to be a bit boring.

In other words, people wanted their oil to be a “brand” with a color or advertising jingle that they could attach themselves to.

Generic products, such as AmazonBasics are money savers.

No advertising dollar or marketing campaign to support. At least in brick and mortar stores that is.

If you are more interested in saving money than in a heart-thumping tagline, you and your pocketbook will love AmazonBasics.

Which brand of synthetic oil is the best?

This is like asking which brand of pickup truck is best.

Don’t ever ask that question or answer it out loud. You can expect a fight between Chevy, Ford, and Dodge owners to happen really quick.

Everyone has their own favorite “brand.” My father was a Valvoline guy since he was old enough to drive a tractor (8 years old he told me). Most likely because his father used Valvoline and it is one of the reasons, I love Valvoline.

This is not to say that other oils haven’t seduced me, including AmazonBasics. I’ve also been known to give Castrol a try.

The best brand of synthetic oil will depend on which vehicle you have, how you drive, and which brand you feel works best in your ride.

Does the brand of oil matter?

In a nutshell, no.

Using the appropriate weight motor oil is far more important than which brand. But some people will argue this point.

Every manufacturer uses a slightly different set of additives depending on what they feel will make up the “best” oil that doesn’t cost an arm and a leg.

Old-timers will say that switching brands is harmful to your engine. This isn’t true, folks.

Your engine is not like a dog’s digestive system. Dog’s experience stomach problems on a short-term basis when you suddenly switch brands of dog food, but this isn’t true of your car.

Look for the API donut mark on any oil you purchase. All motor oils in the US must meet this standard and I’m betting you the can of oil from the dollar store was not made in the US.

It might work for a lawnmower, but I don’t suggest putting it in your car.

This will vary depending on the oil manufacturer, but most will say that 10K is the typical lifespan for 0W20 motor oil.

As I mentioned above, Mobil 1 says their synthetic oil can go for 15K. Some car owners aren’t comfortable with going this long between oil changes.

Even if the oil could go 10K or 15K, do you feel comfortable letting the car go that long in between oil changes?

The fact is that a synthetic oil can probably go 10K or 15K without a serious breakdown in the additives. The real problem lies in your oil filter. Most filters are made with the expectation that you will change them every 3-5,000 miles.

If you intend to use a synthetic oil that can go 10,000 miles without changing it, be sure that you use a quality oil filter that is up to the task.

See my review of the best oil filters here.

Is full synthetic oil worth it?

In the long run, yes, they are.

Yes, synthetic oils tend to cost more but that is short term thinking.

Balance out the longer life of the oil, the added MPG due to less friction, and the longer engine life also due to a lack of friction, and you will see that the benefits far outweigh the cost.

That was a lot of information about oil! Manufacturers have come a long way with additives, detergents, and proprietary blends to keep our engines running longer. The results speak for themselves when car makers are saying not to change oil for 15k miles sometimes!

Now you’ve got enough information to make an educated decision about what goes in your car! 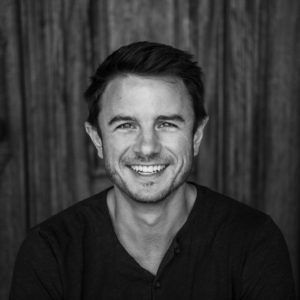